Jersey Boys Closes in NYC: It is Abq Jew's sad duty to inform you, his loyal readers, that the phenomenal musical Jersey Boys has ended its off-Broadway performance run at New World Stages in New York City. 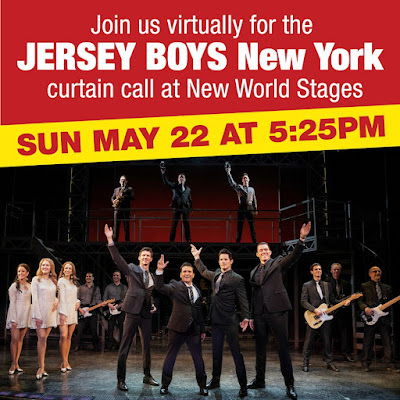 All seasons must come to an end. Jersey Boys, the musical about Frankie Valli and the Four Seasons, has set a closing date for its Off-Broadway run. The show will play its final performance at New World Stages on Sunday, May 22.
Jersey Boys has played in New York for nearly 17 continuous years. The musical opened at Broadway's August Wilson Theatre in 2005 and won four Tony Awards, including Best Musical, in 2006.

After closing on Broadway in January 2017, Jersey Boys reopened off Broadway in November 2017, where it has played until now.

Its only other hiatus was the industry-wide theatre shutdown amid the pandemic, reopening in November 2021 after closing in March 2020. 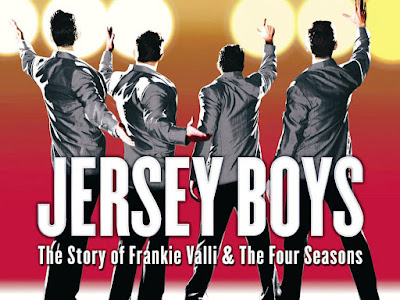 How did four blue-collar kids become one of the greatest successes in pop music history? Find out at Broadway's runaway smash-hit, Jersey Boys. The Tony Award-winning Best Musical of 2006 takes you up the charts, across the country and behind the music of Frankie Valli and The Four Seasons. 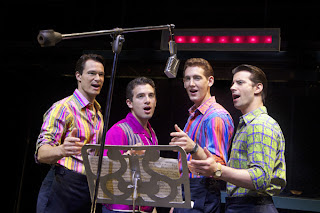 Discover the secret of a 40-year friendship: four blue-collar kids working their way from the streets of Newark to the heights of stardom. And experience electrifying performances of the golden greats that took these guys all the way to the Rock and Roll Hall of Fame: "Sherry," "Big Girls Don't Cry," "Can't Take My Eyes Off You," "Dawn," "My Eyes Adored You," and more.

The last Broadway musical that Abq Jew & family saw on Broadway was Annie Get Your Gun at the Marquis Theatre, sometime around the year 2000, twice. Once with Bernadette Peters and Tom Wopat, and again with Crystal Bernard and Tom Wopat. Yes, we enjoyed the show that much - so who remembers how much we paid?

Jersey Boys just began a national tour on Wednesday - in Omaha, of all places. And when, you ask, is Jersey Boys going to come to Albuquerque? According to the official schedule - never. So here is a taste of what you could see in Chicago or Dallas - but hey, if you're going to get on a plane, better you should just fly to The Big Apple and see the Broadway cast!
For the honor and privilege of seeing Jersey Boys on the very night we decided to go, Abq Jew & wife & daughter paid $129.95 per ticket. For seats in the middle of the mezzanine. And we'd do it again! And again! And maybe even again! The show was so good that Abq Jew may - in a few years - forget how much he paid for tickets. As the MasterCard commercial says: having a great time with your family - priceless.

But to Abq Jew, the best part of the Ben's experience was when a Chinese waiter - who spoke perfect Yiddish! - came over to take our order. After he went back to the kitchen, we called over Warren Krieg, the General Manager. We asked Warren, "Where did you find a Chinese waiter who knows Yiddish?"  Warren put his finger to his lips. "Shh!" he said. "He thinks he's learning English."

Abq Jew must mention, once again, that he & family were in NYC for the wedding of his handsome and talented son, Dov Israel Yellin, to the beautiful and smart Dr Jessica Robin Schnur. Here's a photo: 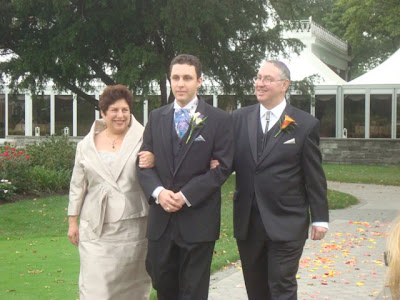 As he is sure you can tell, Abq Jew published this remembrance
before this week's tragedy, for which all of us mourn. 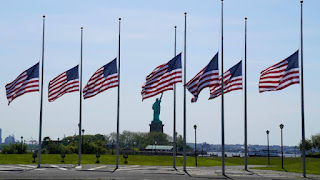