Forever: It is with great sorrow that Abq Jew confirms that his beloved greyhound Henry Nahum has passed over to the Rainbow Bridge. 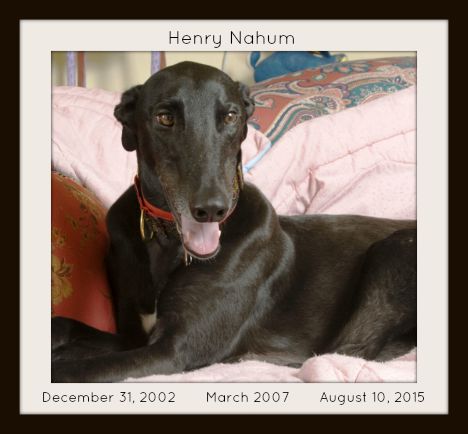 Our wonderful greyhound Henry, (12 1/2 years old), went to the Rainbow Bridge Monday after a prolonged battle with kidney failure and weakness in his hind legs due to neurological injuries sustained as a racer.

He was a fine, handsome, brave, smart and loving dog.  He was super gentle with children, babies and puppies, and took our younger greyhound Belle under his wing with patience and love.  He was always willing to teach Belle by example and protect her.

Henry only wanted to be with us and managed to follow us around as ill and weak as he was.  We will miss him every day.

Although Henry wasn’t our first dog, and wouldn’t be our last, he stood out in his humanity. He seemed to understand every word out of our mouths, from simple exclamations to complex commands. When we spoke, he listened attentively. Not with the quintessential head-tilt that might have indicated he was confused, but with eyes that were intense and focused. Greyhounds are known to have one of the largest hearts among dog breeds, but his eyes told the real story. Vibrantly brown and expressive, Henry could grin, snark, grimace, or pout with a single look.

When I was a teenager, Henry bit every member of my immediate family, on occasion. And on a break from college, in the midst of a full on sob-session after subjecting myself to the 90-minute misery that is Marley and Me, Henry bit me when I stumbled blindly over for comfort, and jolted him from his sleep. We never held it against him. For every half-asleep attack, there were a thousand moments of fully-conscious affection. He loved us far more than he feared us, and years later, he wouldn’t fear us at all.

When we lost our first dog, it was Henry’s quiet devotion that made it bearable. In our years with him, he stood pressed into our sides for every profound loss, and every moment of joy.

Henry Nahum (track name: Kelsos Darkvader) did most of his racing at the Raynham-Taunton Greyhound Park in Massachusetts. He ran both 550 yard (5/16 mile) and 660 yard (3/8 mile) races, winning about one quarter of them.

Henry could run 660 yards in a bit under 38 seconds - which is around 36 miles per hour. (He was much faster on the straightaways, but sometimes slowed down for the turns.) You could look it up. 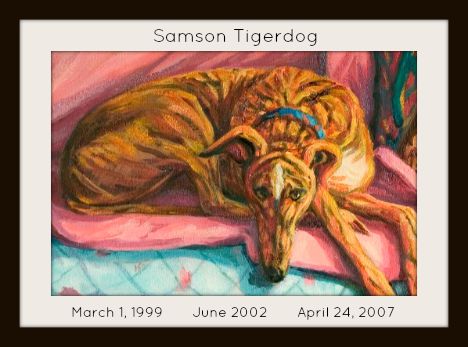 Henry has joined our beloved first greyhound Samson Tigerdog (track name: Forbes Magneteer) at the Rainbow Bridge, where, Mr & Mrs Abq Jew are sure, they are running free and playing together.

In tribute to Henry (and Sammy, and all other racing and ex-racing greyhounds), Abq Jew can do no better than the old folk song about the racehorse Stewball.

About whom Wikipedia tells us:


The horse was foaled in 1741 and originally owned by Francis, 2nd Earl of Godolphin, and later sold.

His name has been recorded as "Squball", "Sku-ball", or "Stewball". He won many races in England and was sent to Ireland. The Irish turf calendar states that he won six races worth £508 in 1752, when he was eleven years old, and was the top-earning runner of that year in Ireland.

His most famous race took place on the plains of Kildare, Ireland, which is generally the subject of the song of the same name. The early ballad about the event has Skewball belonging to an Arthur Marvell or Mervin.

Based on the horse's name, Skewball was likely a skewbald horse. [A skewbald horse has a coat made up of white patches on a non-black base coat.]

Versions of the song were recorded by Woody Guthrie, Leadbelly, The Weavers, Joan Baez, Dan Fogelberg, and many others.

The Greenbriar Boys took Woody's lyrics and wrote a new tune, which is the tune used by Peter, Paul and Mary on their 1963 album In the Wind and on their 1995 album Lifelines Live (with several new or transplanted verses).

And yes, it's also the tune John Lennon used for his Happy Xmas (War Is Over).


The first verse of the PP&M song

will always bring back memories of Henry.

Henry, too, never drank water. He slurped it; he guzzled it; he bathed in it; he stuck his whole head in it. He practically dived into the bowl. Most of the water splashed on the floor. If enough water went down his throat to satisfy his thirst, that was fine. And if not - another dive.

As for drinking wine - no, Henry never did. But he always showed up for Shabbat Kiddush and fresh challah. And he lived a rich life, filled with places he found interesting and people he found fascinating.


Oh Henry was a greyhound - and I'm glad he was mine.