Not Running:  Senator Joe Lieberman, Independent of Connecticut, recently announced that he does not plan to seek reelection when his term expires in 2012.  The New York Times, in its Times Topics page, states:


Senator Joseph I. Lieberman of Connecticut is an independent who caucuses with the Democrats. From time to time he drives them crazy, and from time to time provides them with a crucial vote.


Mr. Lieberman, up for reelection in 2012, will not seek a fifth term, according to sources close to the Senator. 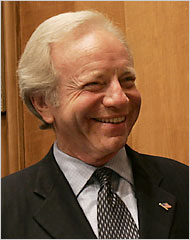 The New York Times's David Brooks calls Senator Lieberman A Most Valuable Democrat, while the Times's Gail Collins wishes a non-nostalgic Goodbye to a Guy Named Joe.
How does Abq Jew react to this news?  Is Senator Lieberman one of the Jewish All-Stars (who can forget his Amazing Adventure in 2000?), or is he an annoying pain in the tuchus?  Senator Lieberman is a complicated man, and Abq Jew feels very strongly both ways.